The History of The Longhorn Restaurant 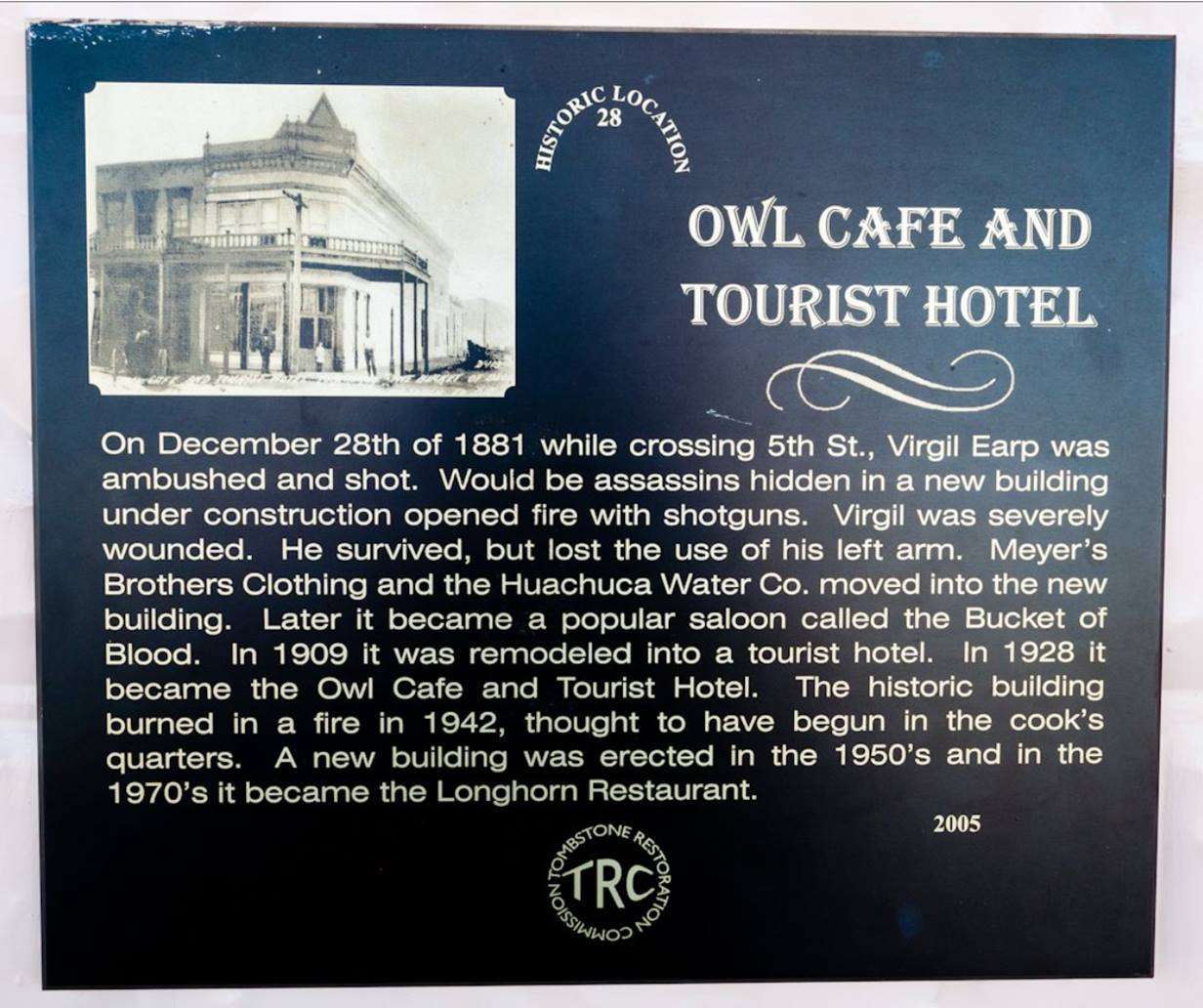 The Longhorn Restaurant is the oldest continually operated restaurant in Tombstone. An historical building, The Longhorn Restaurant is located in what used to be the Bucket of Blood Saloon, the Holiday Water Company, and the Owl Cafe and Hotel.  One of the restaurant’s most famous moments came at the end of 1881 when Virgil Earp was shot during an assassination attempt and when the building operated as the Owl Cafe and Hotel. Earp was walking down the street when shots were fired from a building under construction, which just happened to be this one. Earp managed to survive and the restaurant already gained a degree of notoriety. 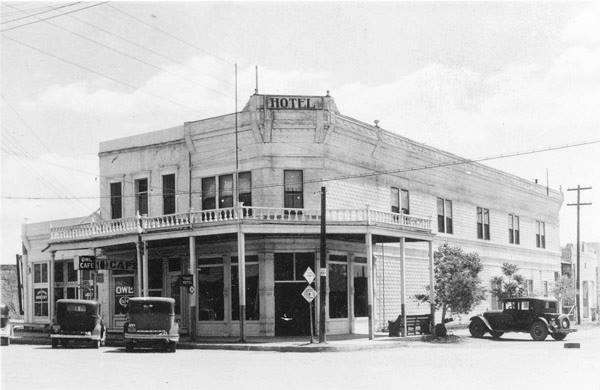 What would have been a disastrous fire was narrowly averted last Friday night shortly after midnight, when the volunteer fire fighters were called out by an alarm turned in at the City Hall.

From some unaccountable source, probably from a discarded match of cigarette, the fire started in room 12 occupied by C. W. Tibbetts, who operates the Tourist Cafe. When he went to retire he found the room ablaze, and by the time other guests had turned in the alarm he had succeeded in extinguishing most of the conflagration, although it was later found necessary to use the big hose, which caused considerable water damage.

The damage, estimated at several hundred dollars, was covered by insurance.

(This event is almost a premonition of the future as the Tourist Hotel and Owl Café had another fire in June of 1930. 12 years later it was burned to the ground in a huge blaze in May of 1942. That corner of Fifth and Allen would lay empty for almost 10 years until Joe Rossi builds an Italian restaurant and 8 unit motel on the corner of Fifth and Allen Streets in 1952.) 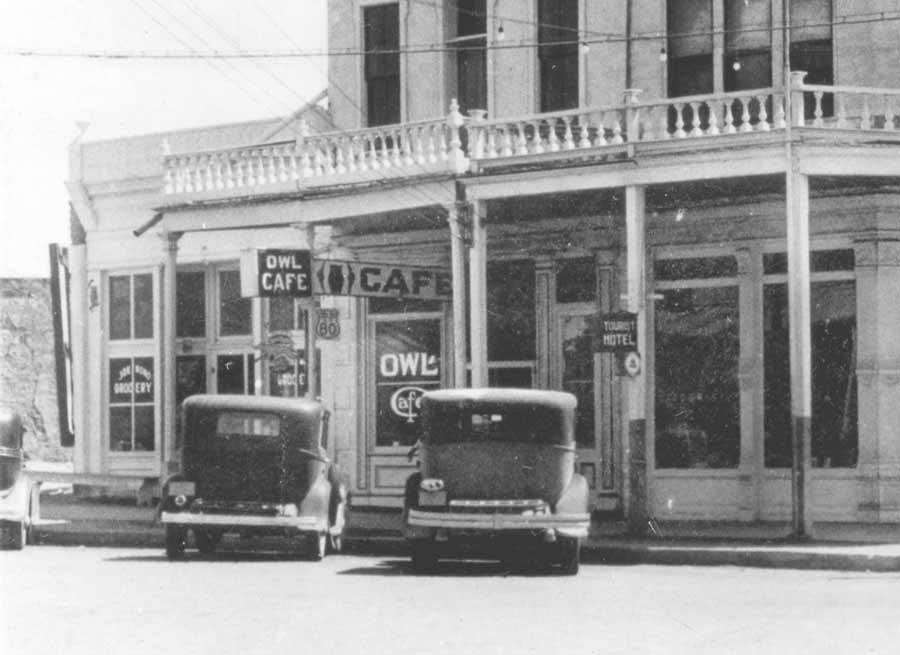 Tombstone, March 9. --Taking advantage of the beautiful weather prevailing at this time; a large force of workmen are employed in the reconstruction of the two story building adjoining the Tourist Hotel, owned by the Cochise County State Bank, which will be occupied when completed by the Owl Restaurant.

While the new restaurant is not a new enterprise in Tombstone, having recently been burned out in another location, there is a real demand for this additional eating place at certain hours of the day on account of the increased number of tourists which are now stopping in Tombstone. 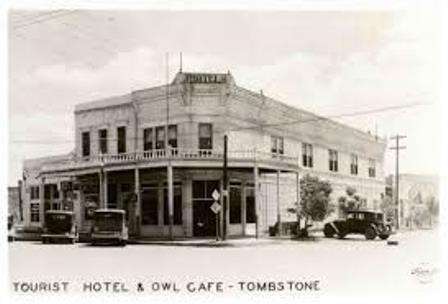 Joe Hood Is New Owner of Well Known Hotel Here; Will Repair Building.  The Tourist Hotel, for many years operated and owned by Mrs. Josephine Rock, pioneer resident of this city, was sold last Saturday to Mr. and Mrs. Joe Hood who took possession immediately.

There has been no official announcement made as yet in regard to proposed improvements or changes in the hotel building but it is thought that the new owners will go to considerable trouble and expense in repairing, enlarging and renovating the building.

Mrs. Rock left this week for California where she will visit for a short time before deciding where she will make her permanent home. She is well known here, being the widow of John rock, pioneer merchant and one time member of the Board of Supervisors from this district.

The new owners announce that they will not change the rates now in effect and will run the hotel along the same lines that it has been run in the past, giving twenty four hour service to transients. Mr. Hood was

(NOTES: The Tourist Hotel stood on the corner of 5th and Allen streets until it burned to the ground in 1942. That Southeast corner of 5th and Allen would remain empty, leaving only a pile of rubble, for almost 10 years until Joe Rossi builds a pizza restaurant and motel on the spot in 1952. Today this corner is the home to the Longhorn Restaurant.) 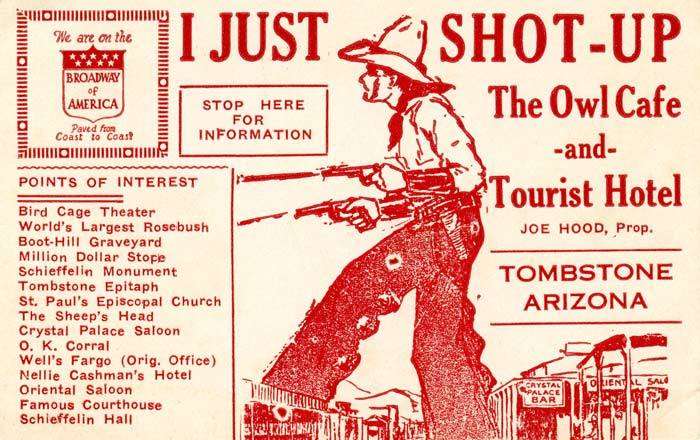 Advertising card for the Owl Cafe and Tourist Hotel on the corner of 5th and Allen streets in the early 1930's. Joe Hood owned the hotel from 1928 until the building burned to the ground in 1942. That corner would lay vacant for almost 10 years until Joe Rossi built a restaurant/motel on the spot. Today that corner is the home of the Longhorn Restaurant. 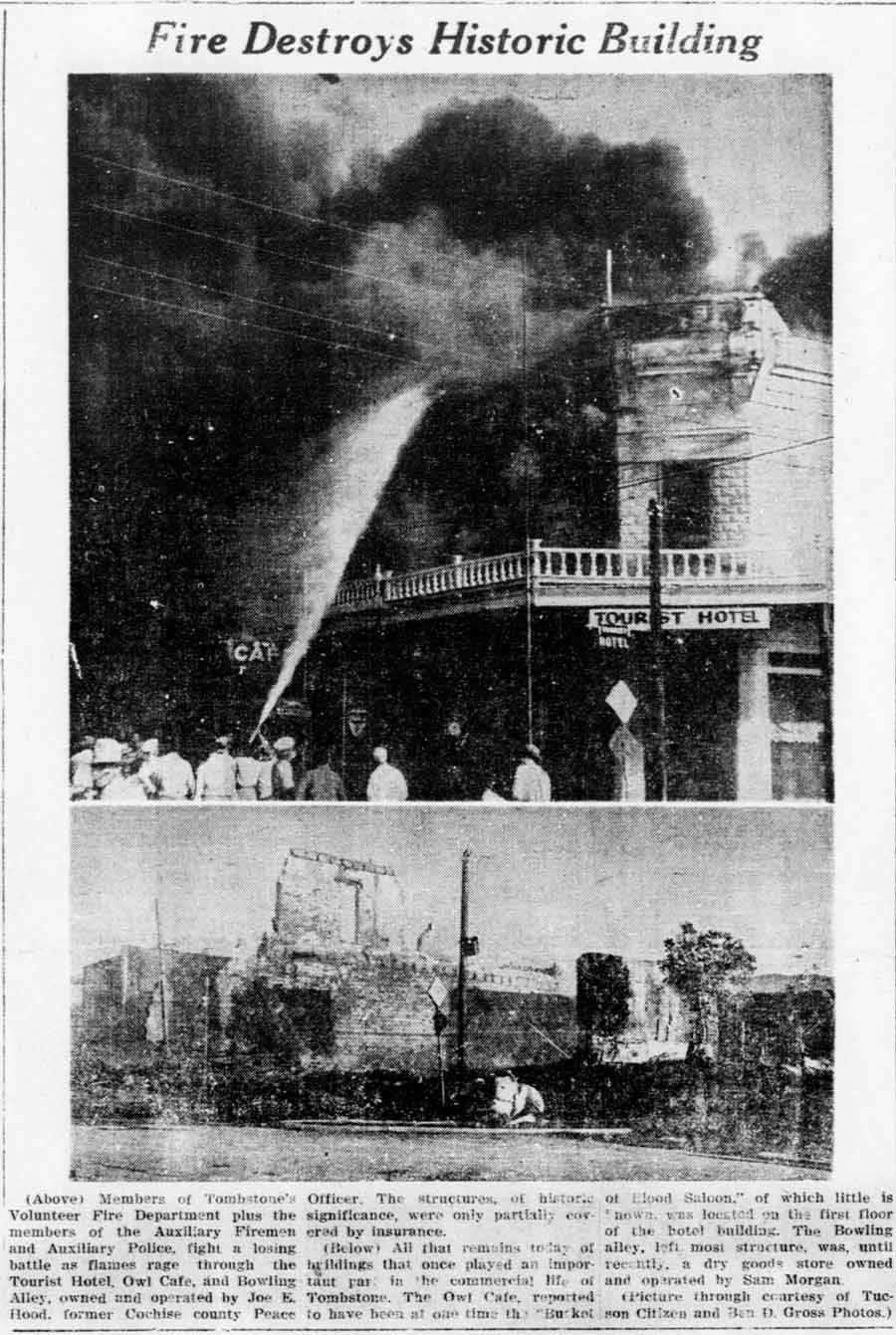 A raging $50,000 blaze left the Tourist Hotel block of Tombstone's business section a smoldering ruin late Tuesday afternoon. Starting in the rear of the hotel the blaze swept through that building, the Owl Cafe, and the bowling alley next door in unbelievably short time. Starting at about 5:15 the three buildings were nearly completely destroyed by 7:00 o'clock.

A reported lack of water pressure during the first half hour of the fire is said to have been the cause of the rapid spread of the blaze, and due, in a large degree, to damage to the premises across the street.

The hotel was full of guests, most of whom are workers at Fort Huachuca. Many of the guests escaped with only their lives, and some of them with practically no clothes on their person. Money, valuables of all sorts, and practically all their personal possessions were consumed by the hungry flames.

Joe E. Hood, owner and operator of the three establishments, had a narrow escape when he made a dash into the burning building shortly after the start, with fire extinguishers in an effort to halt the blaze in the hotel portion. He was nearly overcome by the smoke, and suffered slight injury from falling debris, and some burns about his face and hands.

Among other things lost in the blaze was Hood's 1941 Dodge with only about 5,000 miles on the speedometer. He also lost three bull-dogs, who were unable to get out of the rear of the premises.  The Owl Cafe was formerly the "Bucket of Blood" Saloon which is said to have done a flourishing business in the 1880's when this city was a growing silver mining camp.  It was at this building that Virgil Earp brother of Tombstone's famous frontier marshal, Wyatt Earp, was ambushed by an unidentified assailant and wounded by a charge from a shotgun.

The hotel building was surfaced with sheet metal which made the work of the firemen difficult. It was also a blessing to the rest of the business section in that it kept burning embers from flying to nearby roofs which, at this time of the year are exceedingly vulnerable to fire.  Other buildings receiving damage were the Tombstone Drug Store, Beane's Grocery, C. L. Sanders' Grocery. These places suffered glass breakage and smoke and water damage. Slight damage was caused the Crystal Palace also.

With many of the regular firemen working out of town at this hour, the Auxiliary Firemen, trained under the civilian defense program, dug in and did an heroic job of fighting the fire.  Power and telephone lines were down and the entire city was without phone service or lights until after the fire had subsided and repair crews phone service or lights until after the Some places were without lights all night, but the biggest portion of the system was hooked up as soon as the poles were cool enough to work on.

The fire truck from Bisbee Fire Station No. 2 came over but the blaze had died down considerably before they arrived. However, had the fire jumped the street, as it threatened to do several times, the Bisbee crew would have arrived just in the middle of things. Making the trip with the truck were John Hughes, Jim Wright, David Ruth and Jack Ivey. Several of Benson's firemen were present also but no equipment came from that city. Besides the regular firemen and the Auxiliary group many of the younger group, h high school age, did a fine job on the hoses. At times it seemed that these boys would surely perish from sheer heat, but working under make-shift shelters, they got right up to the blazing structures and finally succeeded in controlling the flames.

The hotel building, constructed in 1880, housed the Huachuca Water Co. on the second floor and a furniture store and the other shops on the ground floor. It was purchased by Hood in 1928 from Mrs. John Rock.   The buildings were only slightly covered by insurance, Hood said, and no plans have been made for the future. Mrs. Hood lost over $100 in cash besides all personal belongings.  The Pete Zamora family of four resided at the rear of the hotel and their quarters were completely destroyed along with the rest of the hotel.  The exact origin is unknown, but it is thought to have started in the sleeping quarters of Woo Get, Chinese cook at the Owl Cafe. 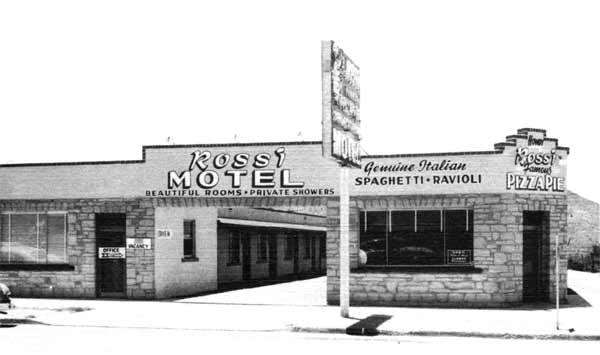 Rossi's Motel and Pizza, postcard from 1956

Rossi's Motel and Italian restaurant will be ready for a grand opening about Aug. 1, Joe Rossi said this week.  Finishing work and installation of fixtures is going ahead as rapidly as possible.  The project includes an eight unit motel, space for a curio shop and the restaurant.   Featuring Rossi's famous pizza pie, the eating place will specialize in Italian food.

Notes: Today the Longhorn restaurant sits over the old motel/restaurant.  Rossi's Motel and Pizza, postcard from 1956, built on the spot where the Tourist Hotel and Owl Cafe was located. The Tourist Hotel and Owl Cafe burned to the ground in 1942. The corner lay in ruins for almost 10 years until Joe Rossi purchased the corner lots and built his Motel and Restaurant in 1952. 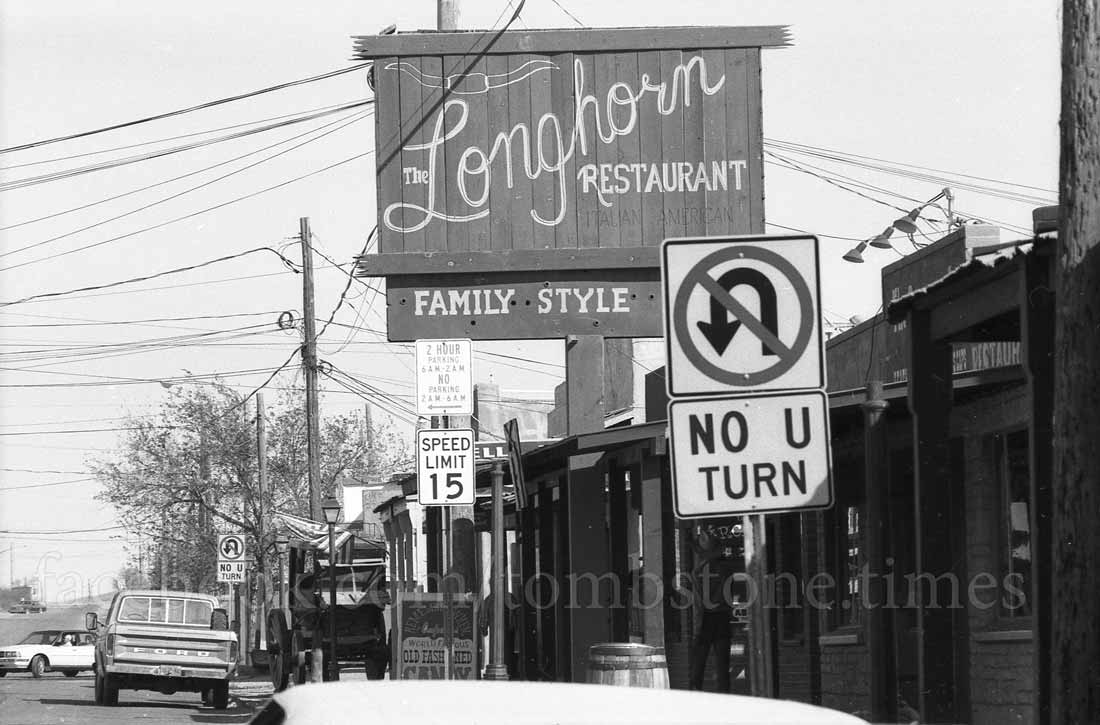 Bill and Mrs. Raulerson have redecorated their cafe and changed the name from Rossi's to the Longhorn.

They have done a great job with the popular eatery, and are assets to the camp.

These folks have made major changes to the old neon sign out front on Allen street that has been the cause for so much controversy over the years. Pelon was never convinced that it presented the black-eye to the camp that many people believed existed. He's none-the-less happy to see it in the current unique form of to-day.

From 1950 until Present Day 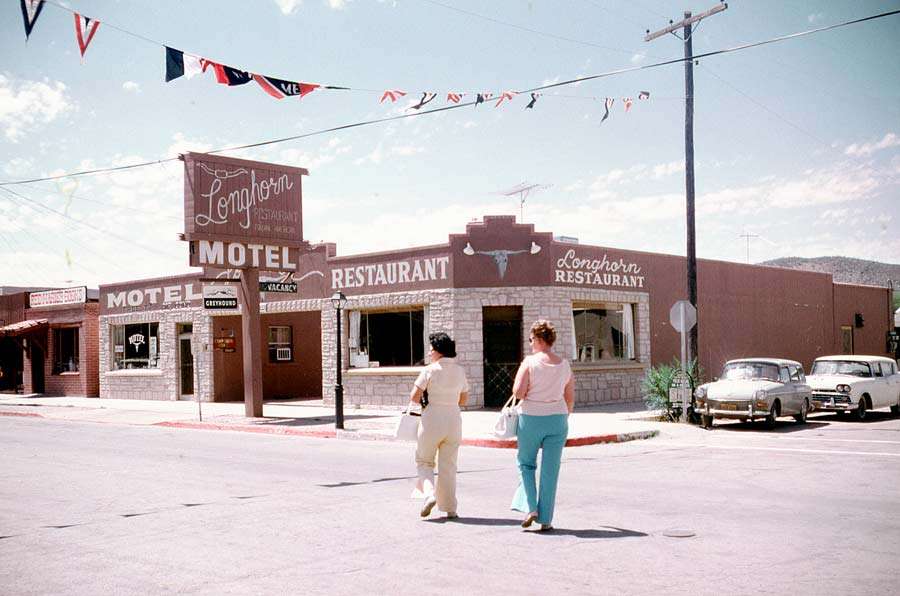 Longhorn Motel and Restaurant in 1973

2005 - Owners are beginning to restore the look of the building.

Under new ownership once again in 1977 (and the same owners today) - the owners decided to restore the building to its old Arizona Territorial glory. A second story was added, the hotel was nixed, and the menu was revamped to suit modern tastes. 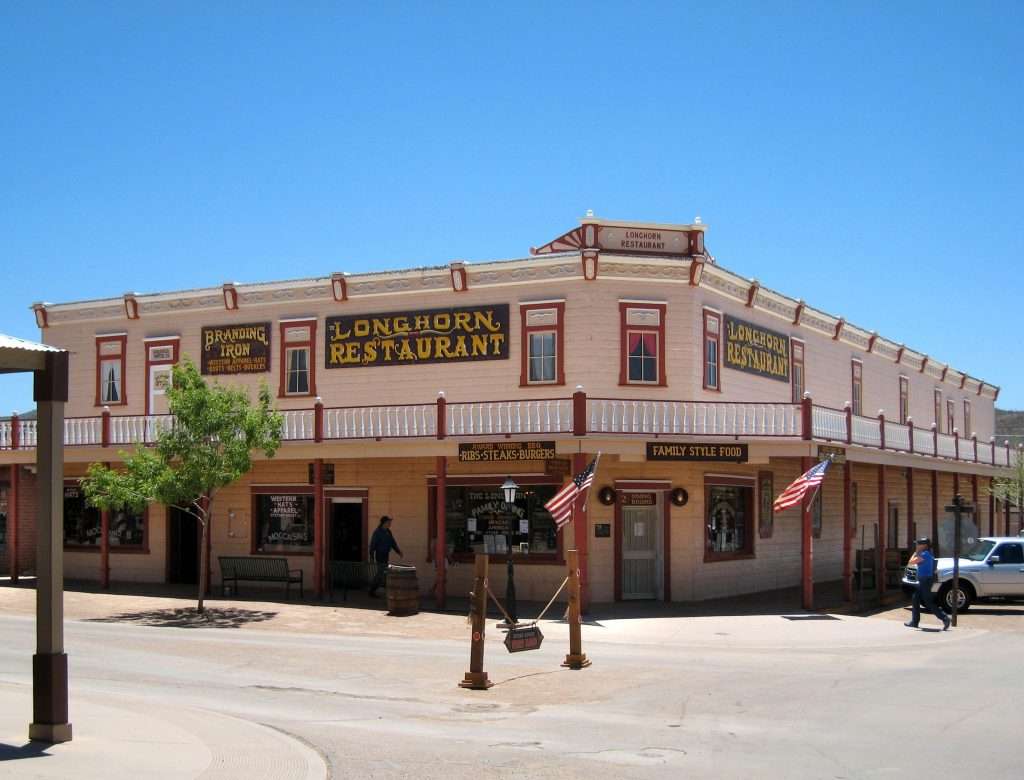 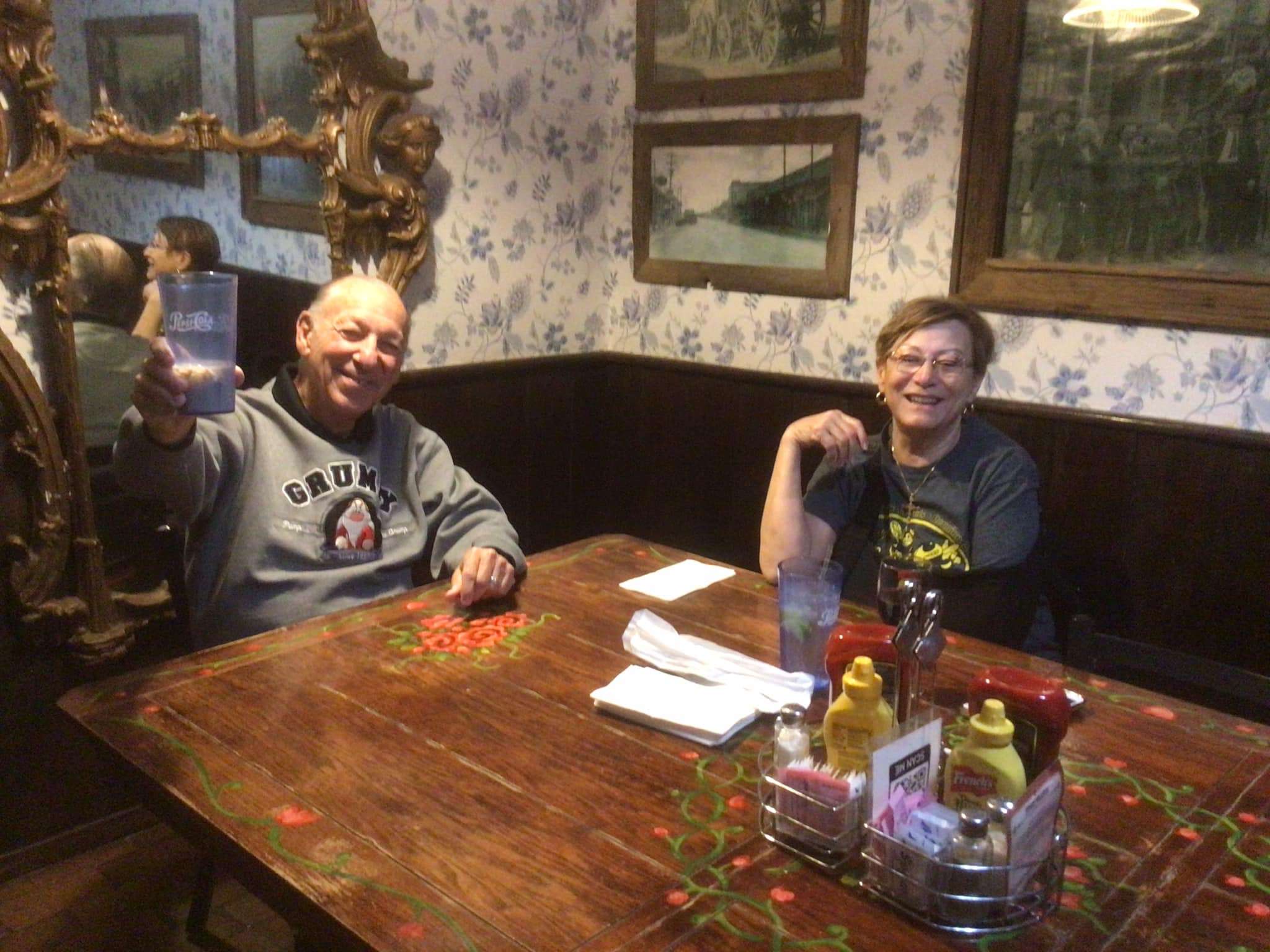 Steve & Gloria Goldstein have been the owners of The Longhorn Restaurant since 1977.